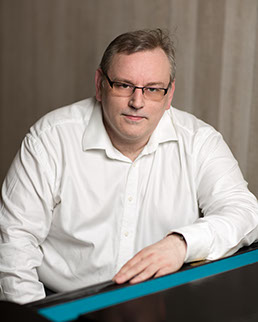 Head of the Music Service

Our music team is led by Richard Jeffrey-Gray who leads a busy life composing, conducting and recording music for film, stage and broadcast as well as making music for the people of the Clifton Diocese.

He has conducted, written and recorded music for some notable broadcast events. The worldwide broadcast of the last flight of Concorde, commissioned by the BBC, was one of these. The orchestral sonic boom caught some by surprise! From recordings alone he reconstructed, re-orchestrated and then conducted the music for two hours of wartime BBC radio comedy, broadcast live. He has also provided music for TV series and award winning theatrical productions His music has been published by OUP and others. See hoxa.net for more.

Throughout this he has been involved musically at Clifton Cathedral, conducting and writing for two consecutive Christmas TV and Radio broadcasts among others, and has written much music for the liturgy there and elsewhere.

He says that the music at Clifton mirrors his approach to other music he makes: the style of it doesn't matter as long as it is well crafted and performed, gets the message across and lifts the spirit.

That's why, as a musician successful at reaching people commercially, he is so pleased to lead a strongly talented team of people to serve the Clifton Diocese.